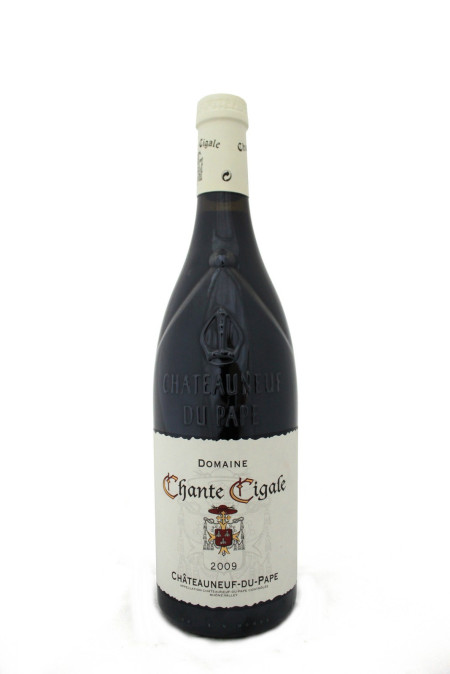 Domaine Chante Cigale, located within the village of Chateauneuf-du-Pape, has been owned and operated by the Sabon Favier family for several generations. Consisting of 102 acres of land classified Châteauneuf-du-Pape, the wines produced from this Domaine can be considered as classic, wellmade, reasonably priced Châteauneufs. Recently Christian Favier the father released the reins to his son, Alexandre, who is fast becoming new rising star of Châteauneuf-du-Pape. Despite only being in his early 20's he has been lauded by notable journalists Steve Danzier in the US and Jancis Robinson, UK.Despite Chateauneuf being known for its red wine production, the area also crafts award winning white wines. The Domaine Chante Cigale produces 5 times more white wine than the other producers in Châteauneuf and it's Chateauneuf-du-Pape Blanc has won several gold medals in Orange and Paris. The soils of the vineyard are made up of clay and chalk covered with a layer of the classic large peebles ('galets') found in this area, which naturally keep yields low. The vines are over 45 years old and situated near the plateau de Carbières (close to Château Montredon). Harvesting is by hand, with selective sorting of the grapes. The grapes undergo a traditional long 'cuvaison' at quite high temperature and with extended maceration on the skins (25-28 days to extract plenty of colour, fruit and tannins. This is followed by ageing for between 14-18 months in 'foudre' (large oak barrels), with 10% in new barrels and 30% in concrete vats. The wine has lots of warm red fruit and damson aromas, with cinnamon, spices and jam but also concentration on the palate; then liquoricey richness and elegance to finish.

With judges like The Gilbert Scott’s Juan Manuel Marcos Perez describing this as ‘outstanding and very complex’, it’s no surprise that this took home not only a Gold medal, but a Critic’s Choice award too. Daniel Nuttall of Adam’s Restaurant described it as ‘juicy and floral, with a good backbone of soft tannin’, while Dario Barbato of Individual Restaurants praised its ‘good structure, with fresh dark fruits’. For Sunaina Sethi of JKS Restaurants, this added up to a perfect match for ‘slow-cooked shoulder of lamb with mash, mushroom and red-wine jus’.