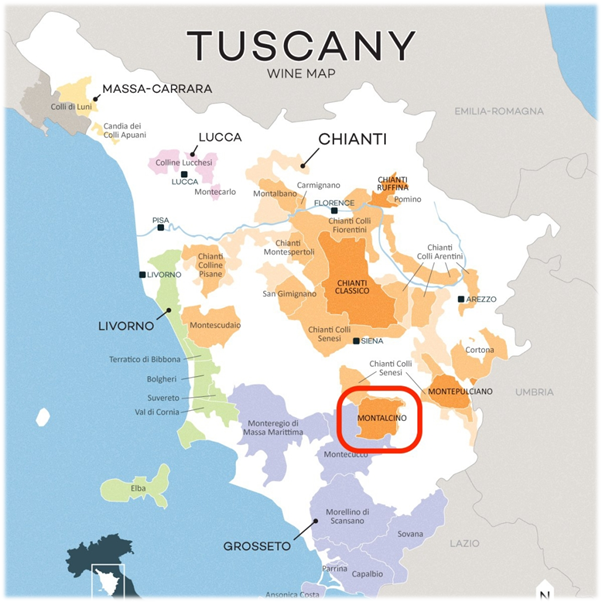 When Michael Corleone first encounters Apollonia in The Godfather, he knows, there and then, he has connected with perfection in physical form… ’hit by a thunderbolt ‘or ’colpito da un fulmine’ as Italians say.

’16 in Montalcino, in wine terms, is such a phenomenon, perfection.

Winter and spring were mild, with ample rainfall, and after a mini drought in April, rains returned. The summer was warm and sunny, but not overtly hot, so the vines were never stressed.

The lack of extremes in temperature and rainfall patterns contributed to an evenness and serenity in ripening.  Harvesting started earlier than usual, yielding perfect, ripe grapes either side of a wet period in the middle of September.

Five years on from harvest, the vintage is widely heralded as one of the greats. Decanter Magazine rates it as 5/5, producing ‘structured, age worthy wines with profound depth, soaring acidity and plenty of drinking pleasure’.

Similarly, www.italysfinestwines.it  rates 2016 as ‘5 star+’, an accolade accorded only a few times in the last forty years.

Wines from 2016 will provide drinking pleasure until at least 2035 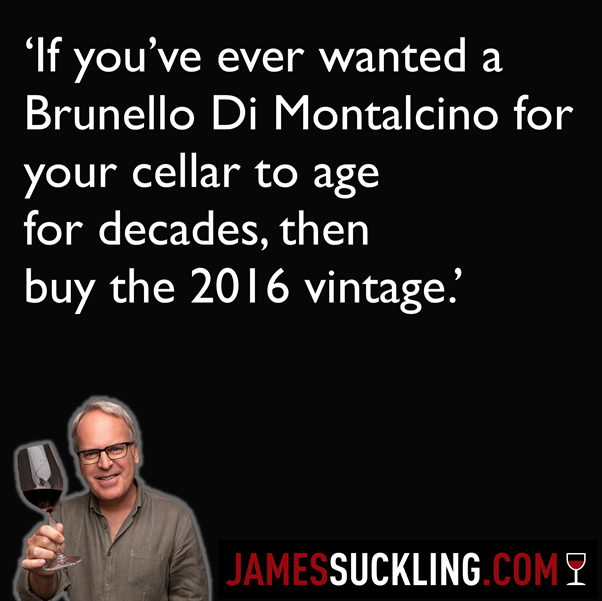 Brunello di Montalcino is rightly considered as one of Italy’s great wines, along with Piedmont’s Barolo, and its Tuscan fratelli, Chianti and Vino Nobile.

However, despite the best efforts of vinous myth makers, Brunello’s history as a producer of fine wines, is a relatively short one (in comparison to Chianti for example).

Clemente Santi isolated the Brunello clone (Sangiovese Grosso) in the 1840s, and his family’s indefatigable promotion of wine from their estate (Biondi Santi) supported by excellent vintages from 1888 and 1891, helped build a reputation.

In the post war years of the 1940s, most vineyards were tended by sharecroppers (‘mezzadri’) for absentee landlords, with most of the wine produced sold (and un-labelled) locally as ‘beverage’ red wine. The mezzadri harvested grapes, grain, chestnuts, and olives in return for seed-crops, tools, and often abysmal housing. 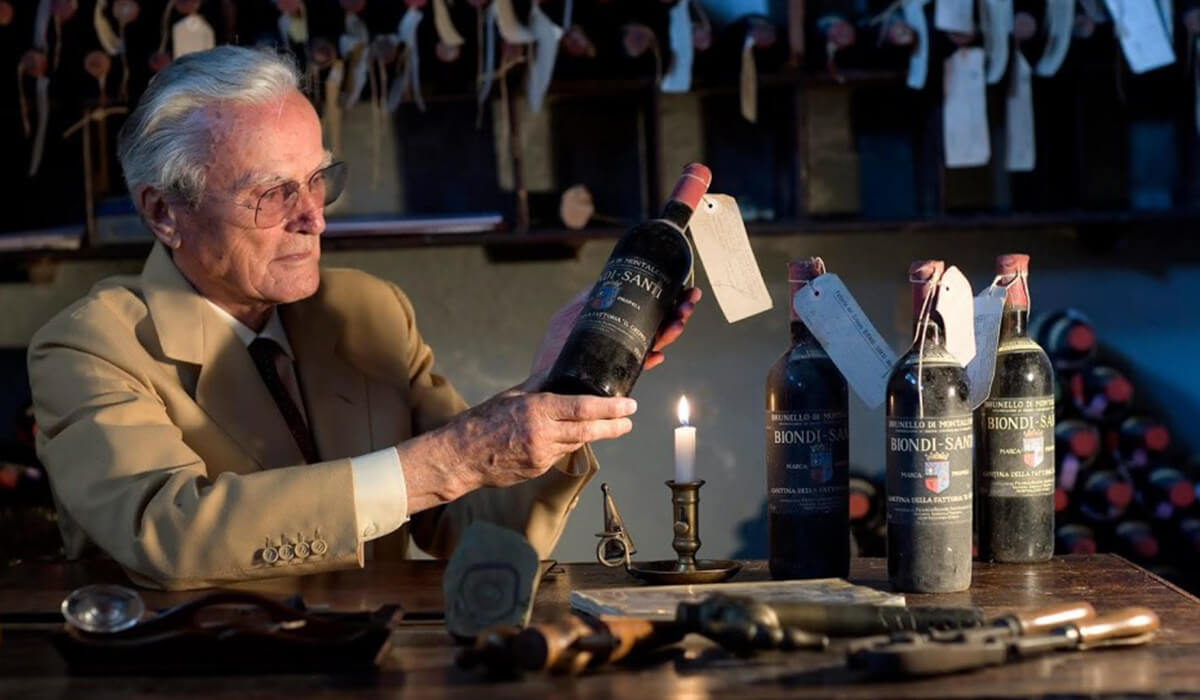 Rural depopulation and a nascent Communist movement were significant at the time.

In 1960 a mere dozen or so estates were bottling and commercialising their own wines.

By 1980, there were fifty producers, benefiting from a demand for the good things in life by Italy’s emerging middle class, and interest from consumers in USA.

Of note is the profound impact of ‘outsiders’. Many estates were abandoned by Tuscans, and only rejuvenated and invested in by families from other parts of Italy, and abroad.

Brunello di Montalcino cannot be released for sale until the fifth year after the vintage, the wine must be wood aged for at least 24 months of that period. Riserva expressions can only be marketed six years from vintage.

Brunello di Montalcino, or historically, ‘the brown wine of the mountain of the holm oak’ hails from the southern Sienese area of Tuscany around 60 km south of Florence, with 2200 hectares of land classified as DOCG cultivated on a mixture of soils (limestone, clay, schist, marl and degraded volcanic material) at altitudes of 150-500 meters.

Montalcino’s vineyards benefit from the cooling breezes of the Mediterranean coast to the southwest but crucially its Sangiovese grapes ripen fully. 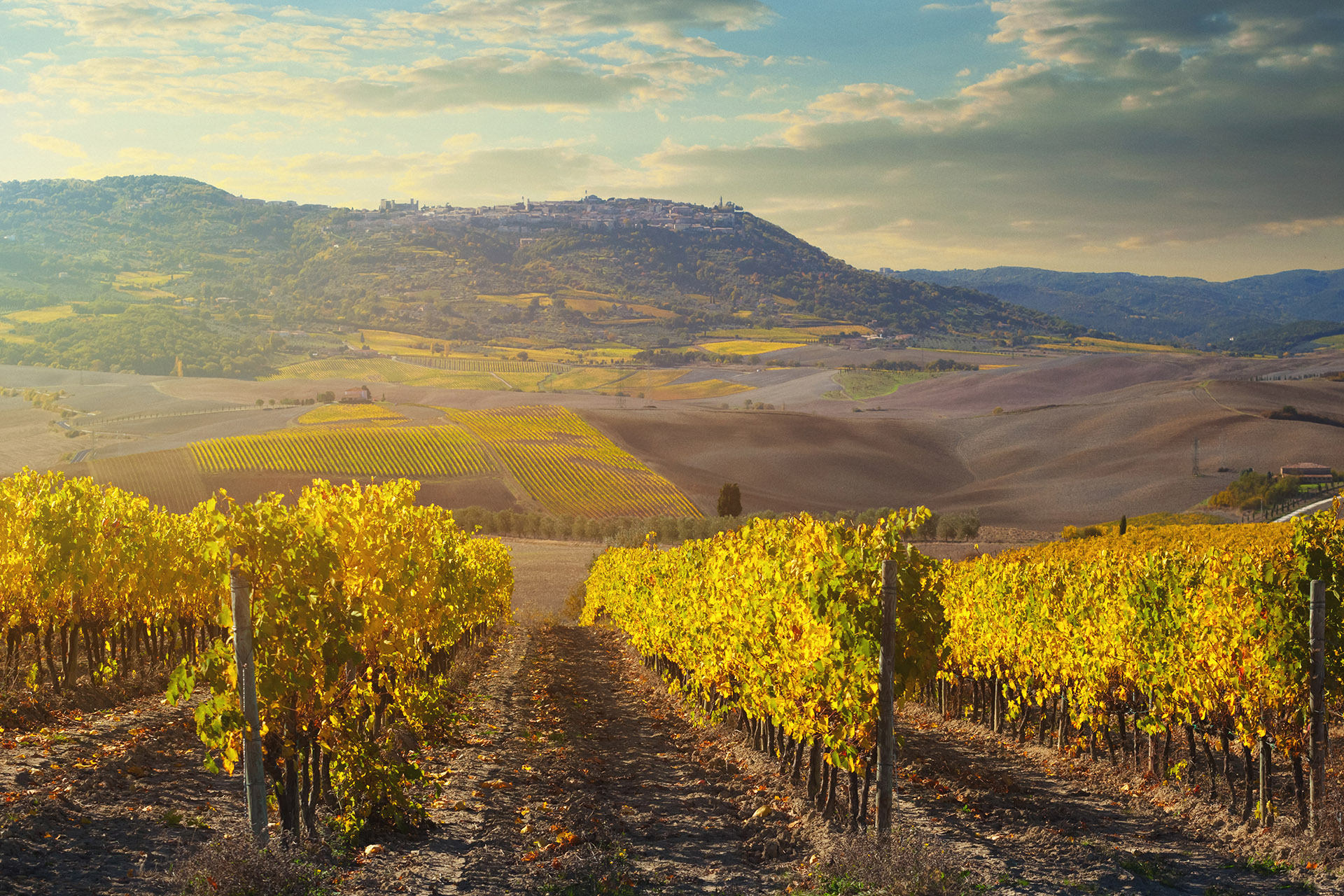 All Brunello di Montalcino is labelled as such; no ‘cru’ or sub-zone classification identification is permitted on labels (as is the case in Piedmont’s Barolo). However, a zonal recognition is proposed by the respected author Kerin O’Keefe in her book Brunello di Montalcino - Understanding and Appreciating One of Italy's Greatest Wines, to distinguish wines produced in Montalcino North, Montalcino South, Castelnuovo dell’ Abate, Camigliano, Tavernelle, Bosco, Torrenieri and Sant’ Angelo.

Poor roads, harsh winters, and lack of access to fresh produce contributed to a ‘cucina povere’ (or poor-man’s cooking) element in the food of Montalcino. Diet was based on the preservable, or the catchable, relying on stale bread and dried pulses, dried pasta (particularly the local ‘pici’), salume, olive oil, chestnuts, and game. 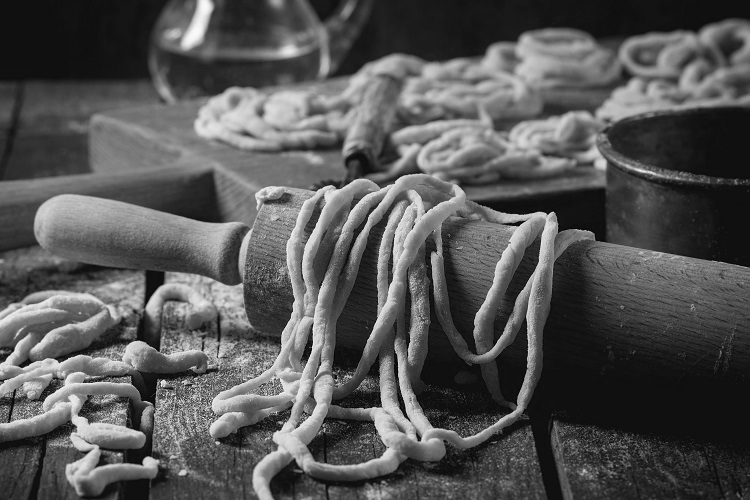 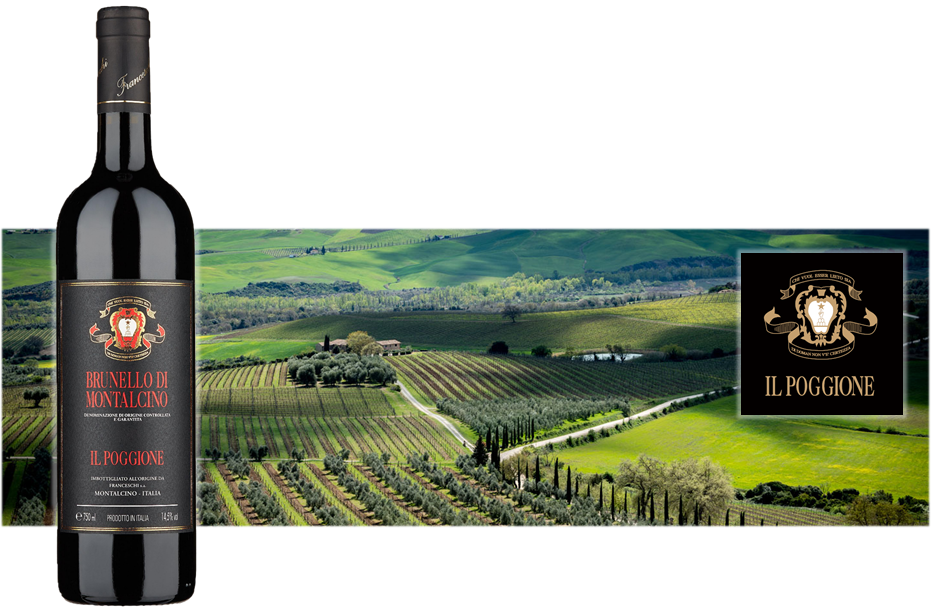 Perhaps a true measure of capability is the capacity to match scale and quality? Ducati make a lot of motorcycles, but they are still Ducatis!

Il Poggione is one of Montalcino’s more significant producers, yet always releases high-scoring wines from its Sant’ Angelo del Colle location. Care of the vines, and wine production are managed by Fabrizio with rigour and accuracy.

The estate’s 2016 is a wine of lustre, depth, richness, and poise, already showing notes of sage and allspice mingled with black cherry and fine tannins. A real classic in the making 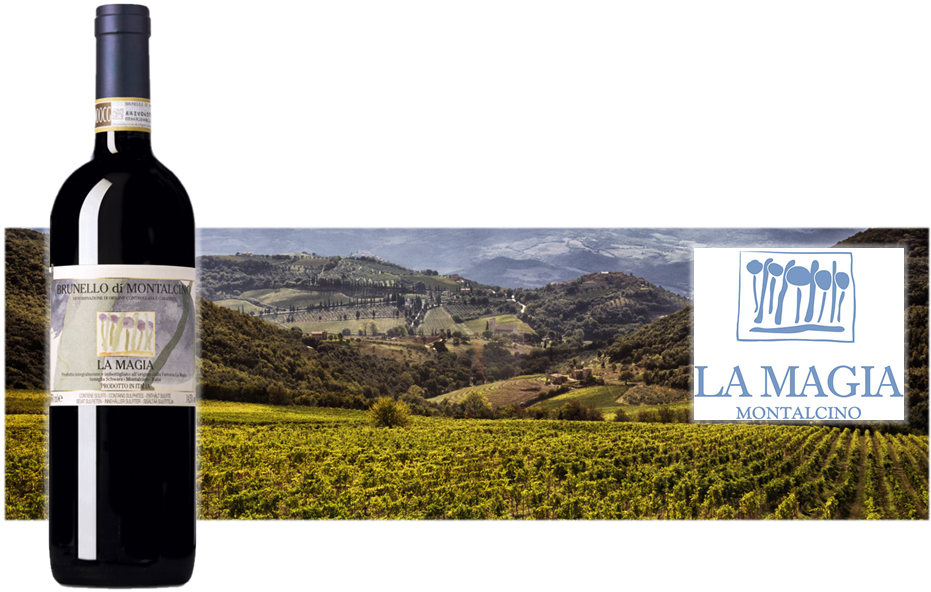 Stefan Schwartz (a native of Alto Adige in Italy’s north), bought La Magia in the ‘70s and was any early estate bottler. The farm (once a resting place for pilgrims) sits high above the UNESCO registered Sant’ Antimo abbey at an altitude of 500 metres thus benefitting from cooling mountain breezes that bring a freshness and energy to the wines.

Now under the care of Stefan’s son Fabian, farming is organic and fermentation un-hurried with maturation carried out in a mix of large oak vessels (botti), clay amphorae, barriques and tonneaux.

The wine has an easy grace, with great length. Still very young, notes of garden herbs, violet are starting to emerge from a concentrated black fruit core. 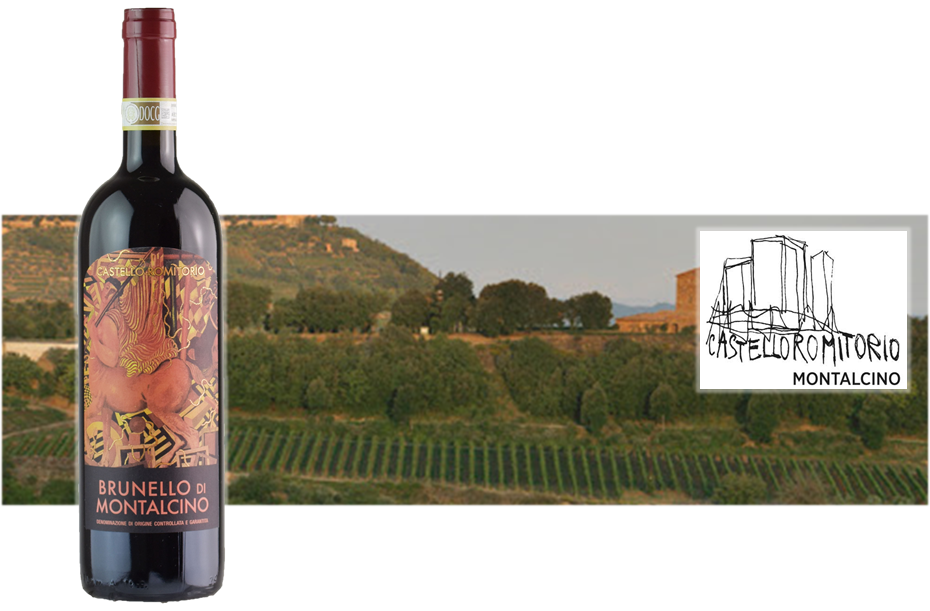 Castello Romitorio is a thousand-year-old historical landmark in Montalcino’s northern area. Built on the site of an Etruscan temple, it was a Sienese fortress at the time of its conflict with Florence, then a monastery, an aristocrat’s home and eventually an abandoned wreck sheltering sheep and goats.

The property was bought in 1984 by neo-expressionist artist Sandro Chia on his return to Tuscany after living for twenty in the US. Partnering with local oenologist Franco Martini, the vineyards and property have been completely restored.

Aged in a mix of large oak and barrique, Romitorio’s Brunello is a keeper; with a dark, brooding appearance, a lifted nose of oak and fruit (particularly dark cherry and pomegranate) and notes of sage, balsam within a densely woven palate. 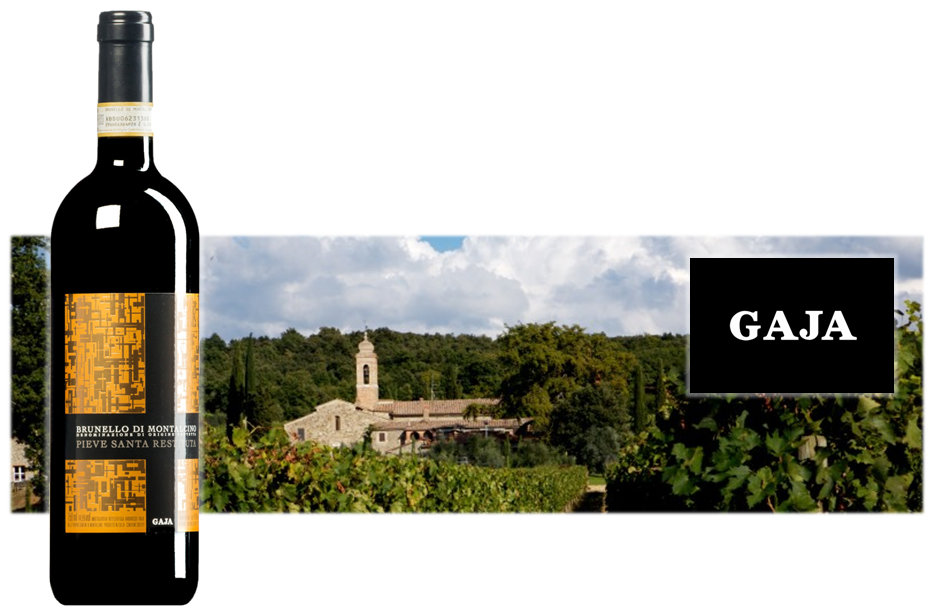 Angelo Gaja is one of Italy’s most important wine-making personalities. Raised in Piedmont, he studied winemaking at Montpellier University, returning in his early twenties to take over the running of his family’s estate in Barbaresco. With the confidence of youth, and freshly acquired ‘foreign’ ideas, he revolutionised vineyard practices, wine-making techniques, and most controversially, aging wines in French oak barriques.

Accolades followed; Wine Spectator Magazine declared his ‘1985 Barbaresco wines were "the finest wines ever made in Italy". He was named Decanter Magazine’s ‘Man of the Year’ in 1998.

Energetic, driven, iconoclastic, obsessive and by the ‘90s extremely wealthy, Gaja looked beyond Piedmont for new challenges. He bought land on Tuscany’s coast, and the Pieve Santa Retistuta property in Montalcino.

Purchased in 1994, he and daughters Gaia and Rossana spent a decade restoring the property whose wine had written references back to 1457.

Our offering is produced from vines in Gaja’s Sugarille and Rennina vineyards and nine hectares owned in Torrenieri.

The wine is deeply coloured, with a fresh, still sappy nose bursting with raspberry and strawberry. The palate is plush, intense, and structured with firm tannins. Already, notes of pepper, dry earth, plum and herbs are emerging. 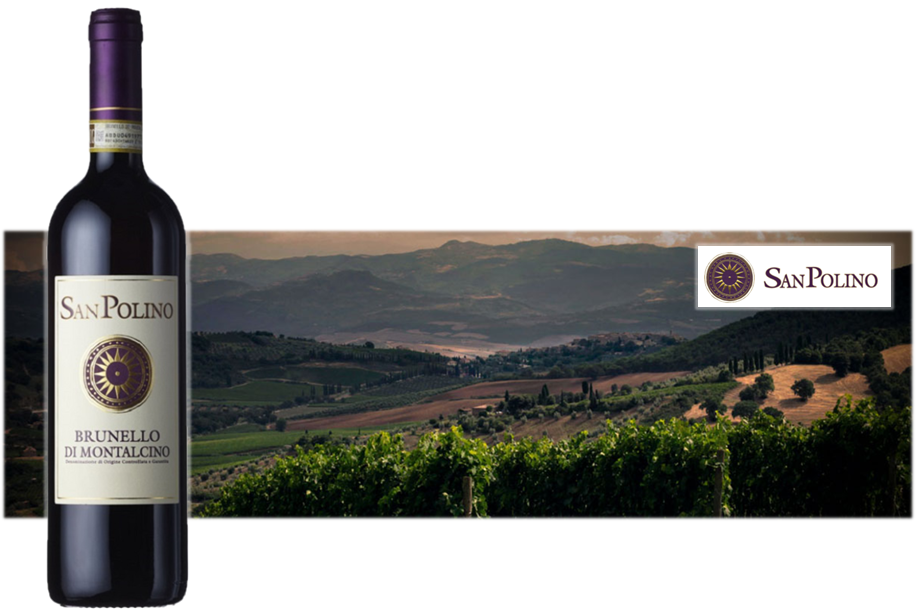 Acquired in 1992 by Katia Nussbaum, San Polino is situated in Val d’Orcia with written records dating back to the 900 AD. It was owned by Montalcino’s charitable hospital, Santa Maria della Croce in the sixteenth century.

The estate is a hot bed of geological and botanic research, with hard-headed commercialising of wine, a secondary priority. Although they love bugs and birds, their wine warrants attention. 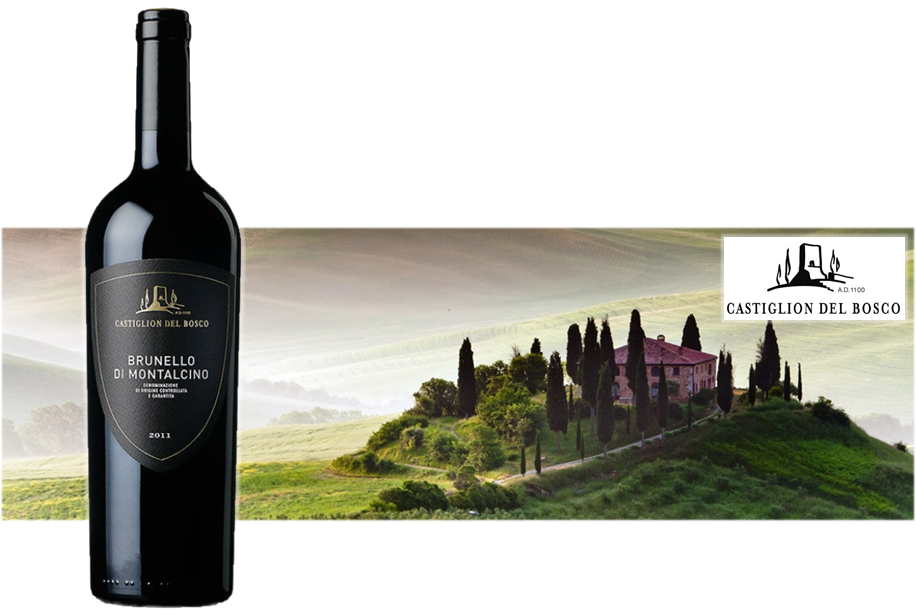 This property is in the Val d’ Orcia National Park, another of Tuscany’s UNESCO sites. Lavishly restored by the well-heeled Ferragamo family since acquisition in 2003, the wine is made by locally trained oenologist Cecilia Leoneschi.

The estate’s 2016 is emblematic of the vintage; ripe, balanced, and elegant. Complex and rich on the nose, there are red fruit, lavender, clove, and cinnamon bark notes. The palate is fresh yet concentrated with plum and black cherry flavours. Destined for long aging.

As already noted, the Biondi-Santi family are credited with ‘inventing’ Brunello with the isolation and propagation of Sangiovese Grosso, however, their first ‘new’ vineyard planted with their own unique clone, was not on their own estate (Il Greppo) but on land where Scopetone now sits.

Like so many farms, its vineyards and property were neglected for many years until Loredana Tanganelli and husband Antonio Brandi bought it in 2009. Loredana’s lifelong passion was for bees and honey, not wine!

Restoration of the vineyards (re-planted in 1978) now yield a few thousand bottles of incredibly perfumed and elegant Brunello.

On the nose, there is sour cherry, clove, sage, and liquorice allied to a complex, silky palate enlivened with fresh acidity. A must buy for those with a leaning towards fine red burgundy rather than Bordeaux…. 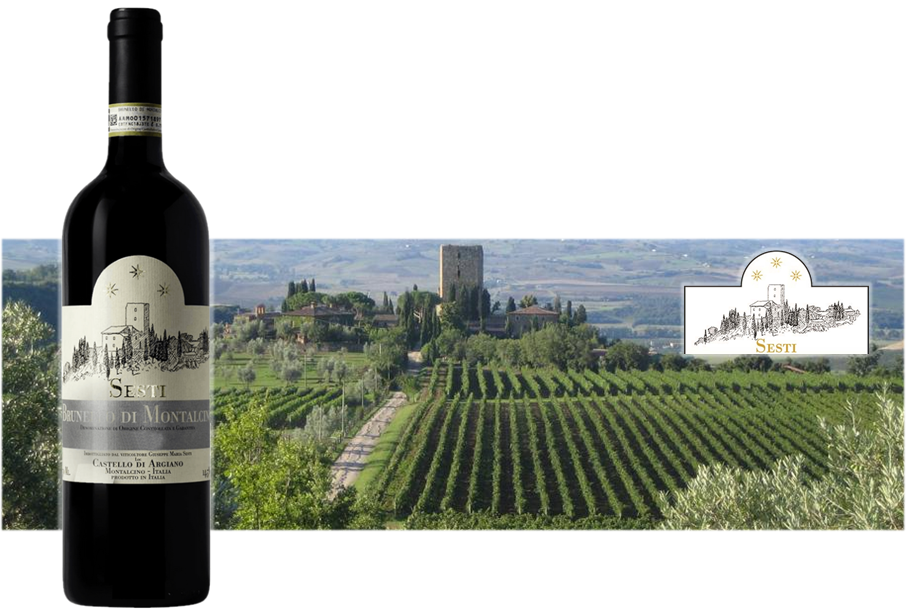 Venetian born, Giuseppe Maria Sesti is one restless polymath! Along with a passion for baroque opera, bio-dynamism and writing about the history of astronomy, he has spent decades restoring the hamlet of Castello di Argiano. He also finds time to manage 100 hectares of olive groves and woodland. Elisa is a graduate of theatre design and classical architecture, also studying at the Sorbonne.

If invited to dinner, you will not be short of conversation.

Organic farming, patient winemaking and a sense of serenity find a place in the wine; it is focused and pure. It has notes of woodland herbs, cedar, dry earth, violet and lavender and a red fruit vitality.

There are currently no upcoming events.